After a break of four years, Tornado welcomed back past winners and competitors, and also some new faces to the much-anticipated event which took place at the NSA Sheep Event, at the Three Counties Showground, Malvern, Worcestershire.

An excited crowd saw twelve teams of two competing, in what, was one of the toughest years ever, due to the exceptionally hard ground conditions.

After a hard-fought competition winners Mark Evans and Nic Quan, were presented with Tornado Trophy’s, and whiskey glasses from the NSA, and not forgetting prize money of £1000, second place, and £350 was awarded to John Morgan of Morgan Fencing and Si Gibbs from HVB, coming a close third were first timers Stuart Miles, from SRM Fencing and Peter Redgwell from PDR Contracting, who received £150.

When asked for their comments on their win Mark told us: “We’re thrilled about this. It was really tough out there this year because of the conditions and also because of the quality of the competition. The result was very close.”

Nic commented: “Tough conditions and even tougher competition. Great to meet up with some of the best fencers from all over the UK to showcase our skills and ultimately aim to drive the profession forward and improve the standard. Top work by all who took part, it was a great bunch.”

The task set for competitors was to erect 70 metres of Torus R8/80/22 –the “Ultimate Livestock Fence”– complete with two top lines of Tornado Titan barbed wire, and a turn at one end. The maximum time permitted was three hours. The competition is judged primarily on quality, and this was universally high. The competitors are only permitted to use hand-held tools and to join the wire with knots.

This year the competition was judged by Kenny Campbell, managing director of Tornado and guest judge Nick Liefting, a very experienced fencer, accomplished author, and twice winner of the prestigious “Golden Pliers”, New Zealand’s Fencing Competition. Nick is a highly respected fencing judge in New Zealand and also on the judging team for the World Fencing Champs in Germany.

Kenny Campbell says: “Having run this competition since 1984, I have to say the standards just keep getting better and better – which is great as that was our primary motivation in the first place. We wanted to encourage farmers to use professional contractors for all their fencing needs rather than treat it as a rainy-day job. We go to great lengths to make fencing the best it can be, so we want to see it erected to its full potential. With contractors from all over the country competing it also gives them the opportunity to learn from each other. I’m always impressed by the camaraderie displayed by all the competitors who are always happy to share ideas with each other.

This year I’m delighted that we’ve been able to add an exciting new element to the winning prize. This year’s winners will travel to New Zealand next year to compete in the prestigious Golden Pliers competition. In 2024 we will welcome a team from New Zealand to what will be our 40th anniversary event. Adding this global element will create further opportunities to learn new ideas and further promote ever higher standards for the industry, very much in keeping with our ethos.

The only downside of ever improving standards is it makes the job of judging the competition harder and harder with the gaps between the first and the last getting ever smaller. Congratulations to all the competitors this year for making the Tornado Fencing Competition such a great event.”

Nick said: “Being invited by Kenny Campbell of Tornado to come on board and join him in the judging team, I regard as quite an honour, and the camaraderie amongst the competitors was awesome to see.

Once the competition starter’s pistol went off, it was a mad scurry of chain sawing and digging, the latter being a challenge.  Just as well the strainers were pre-drilled and had been backfilled
.

As the competition progressed, there was minimal judging that could take place and as I observed the quality of work, I was more than impressed.  It has been 12 years since I first observed a UK fencing competition and the standard has progressively improved to what I observed on Wednesday as the best yet, which is solely due to the likes of Tornado holding their competitions, which I am aware is the longest standing in the UK.

The detailed work on strut morticing and wire work is certainly something those competitors should be proud of.” 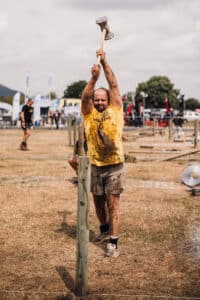 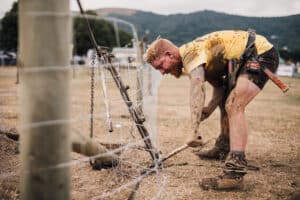 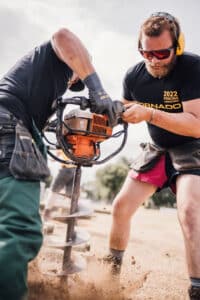 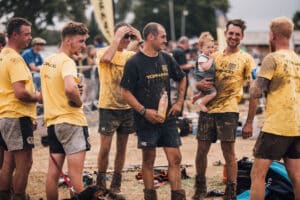 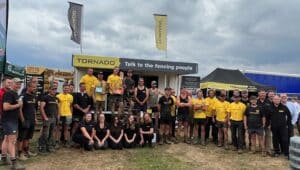